I met Alex Glenn at Queens & Cocktails, an event co-curated by her in Durham, North Carolina. Although this was my first time meeting her, I’ve heard and seen her name everywhere via social media. Allie is definitely a socialite in every positive sense of the word. However, her talent and passion extends way further than mere event planning. She is a singer who has a soulful, melodic voice incomparable to others and her love for fashion and individuality led to collecting and selling thrifted items through her store, Capo Vintage. It would be an understatement to say Allie is a multi-talented mover and shaker in the RDU area. I had a chance to get more details on an upcoming Pop-Up Shop Block Party, Capo Vintage, and what’s next for Allie as a brand. 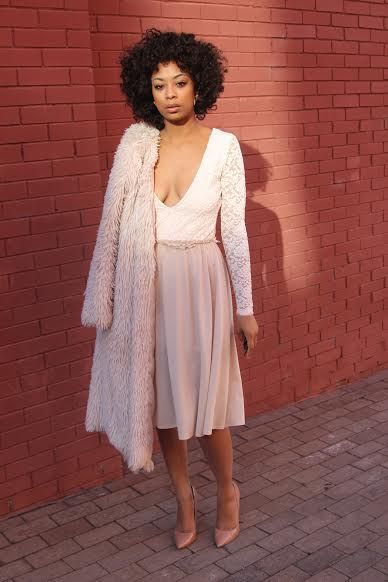 KUWK: You’re a North Carolina Central University (NCCU) graduate. Correct me if I’m wrong, you majored in mass communication? If so, what was your concentration?

A: Yes, I graduated in May 2015. Mass communication major and communication studies was my concentration, which was the closest thing to public relations.

KUWK: Did this major and concentration help you make the decision to start event planning?

A: In a way. When I was at Central, I started out as a textiles major. I have always had a love for fashion ever since I was a little girl. When I got to Central, I was undecided for a year. Then I became a textiles major and my junior year, I switched to mass communication. I immediately got involved with Campus Echo (school newspaper), and became a writer for the Arts & Entertainment section. By my senior year, I became the Arts & Entertainment Editor. As the editor, I was responsible for attending and covering all of the artsy events, that is where I really started to get a feel for those events and decided to create my own that will provide other talented, local artists with an outlet to display their talents.

KUWK: What made you co-curate Queens & Cocktails?

A: I was communicating with a friend of mine. She recognized my work in the Arts & Entertainment community, and she made up for what I lacked on the business side of things. We were talking one day about putting on an event that will uplift the women in the community and give them an opportunity to display their work, talent and network while being recognized for their accomplishments and goals.

KUWK: It is no secret that networking and collaborating are crucial components to success within any field. How hard or easy was/is this for you?

A: It was very easy. Being a mass communication major kind of forces you to sharpen your networking skills. Networking is key! I remember going to job fairs and having my skills put to the test. The elevator speech (a QUICK introduction about who you are, what you do and why you are an asset to that particular manager or business owner) is very important when doing so.

KUWK: “Pride is the enemy of success” is a quote I saw a while back and now apply to my everyday life. Do you often feel you have to put your pride on the back burner to achieve any of your goals?

A: Yes, of course. I struggle with this. I have always been an independent, DIY (Do-It-Yourself) type of person. When throwing events or putting projects and teams together, I often struggle with asking for help, because I like to do everything myself. I’ve learned to not be afraid of asking for help.

KUWK: Juggling multiple tasks is no small feat, but you seem to be a multi-tasking goddess. Of the three known components (planning, Capo Vintage and singing), do you prioritize one over the other? If so, which one? Why?

A: I have the biggest struggle with juggling all three. I was working two jobs while event planning, keeping up with branding & restocking clothes for Capo Vintage, singing at open mics and dancing here and there. Being multi-talented is a blessing and a curse. I still don’t know which one I like more, but I do know you should prioritize each task based on the one you are most successful and passionate about. If you put all of your energy into one, the doors for the others will open in due time.

KUWK: You have an upcoming performance in Raleigh at Ladies First, An All Women Showcase. How do you prepare for a performance besides soundcheck?

A: Besides practicing with the band, it’s a lot of mental preparation also. I am such a shy, nervous person and still working on overcoming that.

KUWK: In addition to your love of fashion, what made you begin collecting and selling thrifted clothing?

A: When I went to college, money was tight, as it is for everybody. I feel like thrifting is part of the HBCU (Historically Black College/University) fashion culture. I became a part of that culture and just ran with it. In high school, my friend and I would sew bell bottoms into straight legs, because bell bottoms were out of style when I was in high school. I’ve always liked cutting and changing up clothes. So when I got to Central, I started collecting and reconstructing clothing. As soon as I graduated, I had more time on my hands to really figure out what I wanted to do. This led me to creating a Capo Vintage page where I displayed all of my good pieces. I would also showcase and sell the pieces via pop-up shops.

KUWK: Were there any obstacles faced while establishing Capo Vintage? If so, what were they?

A: Yes, there were obstacles and still are today. I hate online selling. Point-blank-period. That was one of the reasons I started the pop-up shops. However, that is a missed opportunity for possible online customers and sales. Therefore, I am now in the process of creating an online store.

KUWK: I’m assuming Round 5 insinuates the fifth pop-up shop being held for Capo Vintage on the 26th?

A: Yes, this pop-up shop block party will be held at The Makery. I am having vendors, food, games, performances and more at this block party. I’ll also be vending along with the rest, where customers can find spring florals and transitional fall/winter pieces. It is from 12-6 at The Makery on 401 W. Geer St in Durham, North Carolina.

KUWK: This pop-up shop is a bit different from the rest you’ve held, because this event will celebrate your birthday and Capo Vintage being sold in stores! Congratulations! Where will the items be sold?

A: Thanks! and yes, Capo Vintage is finally in stores! The items will be sold at The Makery. The pop-up shop block party is the celebration of the grand opening and my 23rd birthday which is on the 28th.

KUWK: What’s next for Allie Capo as a brand?

A: Really just going to focus on promoting Capo Vintage being sold at The Makery, setting up an online shop, work on singing and getting booked for more shows and establish my presence as a vocal artist. My long term goal (2 years) is to eventually own an event space.